Why I became a Celebrant 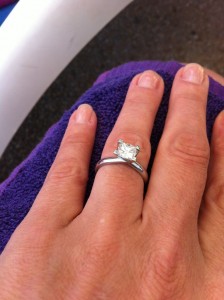 See this photo? This is the reason that I became a celebrant!

This photo I received to my phone whilst I was sailing on the Pacific Ocean. Well, I wasn’t in charge of the sailing, I was in charge of having a good time with a great high school friend to celebrate our upcoming birthdays on a P&O Cruise when my very best friend in the world sent me through a text message with the photo attached.

Cue much happy dancing and squealing – which alarmed the elderly ladies sitting next to me as they thought I had won Bingo (Side note : turns out, I LOVE bingo on cruise ships!). It was high stakes that day!

Due to the suspect coverage out in the middle of the ocean, I had to wait until I returned back to the shores of Australia to get the full proposal story which was as romantic as I had hoped.

But then the newly engaged couple turned the tables on me and as we raised glasses and celebrated they popped a question to me:

Would I please marry them?

Now being a Marriage celebrant had never crossed my mind however I was beyond honoured that the person I considered to be more family than friend and her future husband wanted me to perform something so amazingly special in their lives.

So the research began and before you knew it, I was enrolled in a course to become a celebrant!

Now, I should let you know that it’s not as easy as one, two, three and you’re a Celebrant.

I did my Cert 4 in Celebrancy as a ”blended course” which meant I attended a 3 day workshop and then had to complete the course online which included months of assignments (a rude shock when it’s been a while between schoolwork!) and then once I passed with flying colours (pop the champagne corks!), it was a rigorous registration process to apply with the Australian Attorney General’s office to become authorised Civil Celebrant.

But I did. And I was thrilled. Cue more champagne corks popping 😉

I fell in love with being a Celebrant and with each and every ceremony that I get to officiate makes my love for this grow. The crafting of an individual ceremony to include each couple’s love story, their personalities while including their guests in the day is an honour. I would be honoured if you let me help you with your day. Let’s tell a love story shall we? x

Leave a reply Click here to cancel the reply